Ablutions, hall and water and electricity. No swimming. Some tents for hire. Resident warden. On Prince George Drive, which leads to Muizenberg and South Peninsula beaches.

Gilray campsite is situated in Grassy Park in the southern suburbs of Cape Town. It is used for weekend camps, day activities and adult training courses.

Facilities include a large campsite area with trees and grass, a hall and kitchen for training courses, ablutions, water and electric power. There is a resident warden. There are no swimming facilities.

Gilray campsite is also used as a paintball range.

Gilray Scout Camp was acquired on lease from the Cape Town City Council around 1954. It was named after Carl Rayner and his wife Doris, who was known as ‘Gilkela’. Gilray was officially opened by the Cape Town Mayor, Mrs Joyce Newton-Thompson, in 1958. The Gilray Hall, also opened in 1958, was named after the then Chief Scouts Commissioner, Charles Thebus. Major development of Gilray during the 1950’s can be attributed to Alex ‘Jakala’ Philander.

Over the years many volunteers and Groups have assisted in developments on Gilray. To encourage this in recent years, the Ogle Trophy was awarded annually to the Group assisting the most in maintaining Gilray over a year.

For 32 years Mr Dennis Dooling was warden of Gilray and him and his family lived on the premises, playing a vital role of maintaining and control.

Read The History of Gilray, on the Western Cape Scout Heritage website. 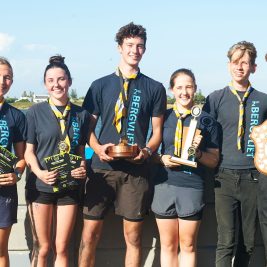