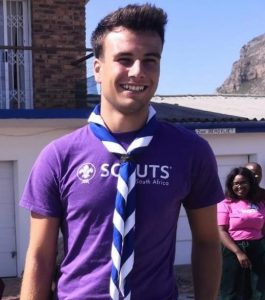 I knew I would have to leave one day and write a story about my time in South Africa. I just never expected to write it from Germany. This year – even if it was not a full one – was one of the best I’ve ever had! When I was asked last year what I expected of my stay, I answered that I didn’t want to be a guest or a tourist, but that I wanted to really participate. And I can say that I have, because so many people gave me that opportunity.

I remember my first day in Cape Town, when I stepped out of the plane, into a country which was a lot colder than expected, and where I knew nobody. I was immediately welcomed by the Williamsons, my warm host family that was kind enough to take me into their home and accepted me as a part of their family. I also met so many people whom I now call friends, that showed me the beauty of their country and their life. During my time I also became part of something even bigger, the Scout Family. 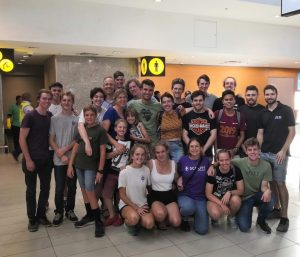 The next time I entered the airport, I was surrounded by a group of friends and was leaving a place I now can call my second home. Not only did I learn about different cultures and languages, make new friends and experience lots of adventures, but I also learned about myself.

I spent most of my time either being outdoors or doing Scouts. Especially with my Scout Group 2nd Rondebosch or as I prefer to call them “The Jungle Scouts”. I learned and even contributed more than I would have ever expected from this amazing Troop. They gave me the chance to be a part of an amazing team of Scouters and Scouts and took me on their adventures like the Transkei Tour, which is something that I would have never experienced on my own.

That was one of those “being thrown into the deep end” moments that teaches you so much!

For my own excitement I joined 6th Rondebosch as well, as a Rover. I got a totally different point of view of Rovering. And they probably got a totally different view of German food after my Squire challenge! The first Rover activity I participated in was a sailing camp. I still remember how everybody seemed to know everything about sailing and Jula and I just stood there being overwhelmed by the whole situation. Looking back, that was one of those “being thrown into the deep end” moments that teaches you so much! At every competition or hike I got to know more new people and got even more new input.

Through working at the National Scout Office I was given the chance to see how the whole movement works. I can now also call myself ‘the fastest badge counter in the south’! Along with Jula I really had some great hours in this office and will never forget it.

I’m glad that I was a part of Scouting-in-Schools (SiS) too. This is one of the most amazing programmes I’ve seen so far. I made great memories while climbing Table Mountain and participating in the SiS Eco Camps at the Scout Adventure Center Hawaquas. I remember how I was so amazed to see my first baboon ever, while everybody else was just acting as if it’s the typical friendly neighbourhood cat … While training the interns we also visited the schools in the townships and poorer communities. That made me realise again how different Scouting can be from place to place. But I even learned a bit of isiXhosa there! 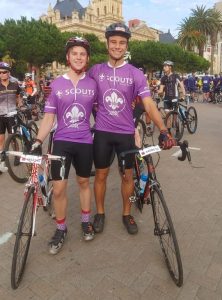 The beauty of Cape Town’s nature lies within its mountains and the sea. Through Scouting I could experience both in the best way. So many times I have seen the sun rise and set from the top of lions head, walked through the clouds on top of table mountain or tried my best to sail in the vlei or to surf. I never expected to participate in bike races but ended up racing in one of the biggest cycle tours around. Another type of beauty is within the feeling of finding your personal freedom in the little things. Sitting in the back of a bakkie and driving towards the sunset is something I’ll never forget. And of course … I found so much beauty within all of the people that showed me Cape Town – as they know it.

Beauty in the feeling of finding your personal freedom in the little things.

A big thank you goes to my host family – the Williamsons – that have been kind enough to take me into their home and dealt with me for almost eight months. You guys did more for me than I would have ever expected and I will never forget it. Thank you so much.

Knowing that I missed out on few things like PLTU, Kon-Tiki or some holidays, I still can say that I made the very best out of this year and that I have nothing to regret. This year was full of new experiences and joy. It was simply lekker!

I’m glad to have made the decision to come to South Africa. Meeting you all and sharing some incredible moments with you is all I’ve ever wished for.

Yours in Scouting and gut Pfad,